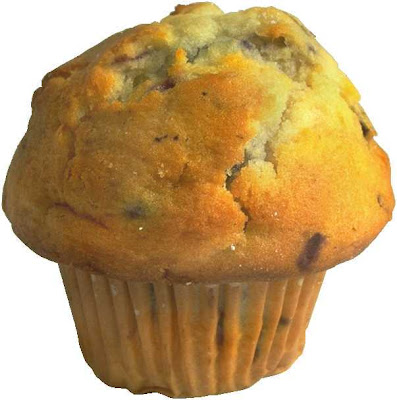 I’m officially announcing my registration to run the Twin Cities Marathon this October. I’ve been intending to run another marathon for several years but have been too afraid of failure to register. But the time has come for me to admit to myself that I’m not nearly as fast as I used to be – that this will not be a personal best time for me – and that it’s ok to admit I’m out of shape again.  I’m going to run it anyway.
You see, I discovered the joys of running during the summer of 2003 and quickly discovered that I was actually a pretty decent runner.  I ran my first timed event on 21 April 2004 – the Salt Lake City Marathon with a chip time of 3:03:43.  For several reasons, the competition was pretty sparse at this marathon, so my time was good enough to earn me 3rd place in my age division.
It felt great!  I was actually pretty shocked at my time.  I had never timed myself until less than a week before the Marathon, so I was tossing around an ill-informed goal time of 3:30:00.  While I was standing at the starting line, I saw the pace runner holding the 3:30:00 sign and I made a commitment to myself to keep up with him.  So when I finished a whole 27 minues ahead of him, I was ecstatic!
Four years later, however, my zeal for running has waned, my sweettooth and love of greasy burgers has returned, and I’m finding myself a full 25 lbs. heavier than I was on race day in 2004.  And it feels lousy.  Really lousy.  Most of my wardrobe is now unwearable because I don’t fit in it anymore, and what were formerly my “fat pants” are now my “skinny pants.”  Everything else makes me look and feel like the attack of the muffin-top.  I’ve wanted to register for marathons in both 2006 and 2007, but I’ve known that I wouldn’t beat my original time.  And somehow, not living up to my original time made me feel like a failure – enough so that I didn’t even want to try.  I kept thinking that if I could just train a little harder, I’d get back in shape, THEN register and beat my time. Then I’d never have to admit to myself that I was out of shape again.
But it’s time for me to admit to myself (and the world, apparently) that I’m no longer in shape.  I’m no longer capable of a 3:03 marathon, and it’s not even appropriate to use the title “runner” to describe myself since I do so little running anymore.  But I’m going to run it anyway.
I’m recommitting myself to jogging 6 days a week beetween now and race day (other than the 2 weeks I’ll be cycling in Europe).  I’ll give myself a training crash course, go on a diet, and I’m setting yet another ill-informed goal time of 3:30:00.  Wish me luck, faithful readers, I’ll need it. 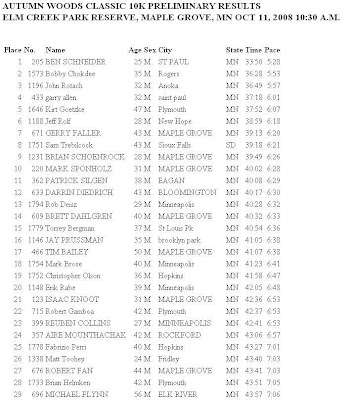 I ran in the Autumn Woods Classic 10K on October 11th, this past weekend and placed 23rd overall (out of about 600 runners).  I’m pretty proud of my performance.  My time was 42:41.  I wish I had kept better track of my past times so I could compare my performance over time.  So one of my purposes for posting the info here is to preserve it so I can find it later.

Wanna know what sucks, though?  My friend from the office who also ran in the race TOTALLY WON the overall woman’s race, but something malfunctioned with her electronic timing chip, so her time didn’t get recorded!  I WATCHED her cross the finish line and she was MOS DEF the first woman across the line.  oooHHH.  I’d be so MAD!

Legs are sore today after running a 10K with my office team, today. 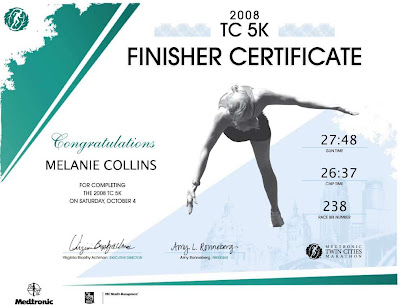 Melanie and I, b+k, and tbert all participated in the 7th Annual Sour Grapes Half & Half Run. Melanie and I agreed that it was definitely the toughest course we’ve ever run. It was located in Brainerd in the Northland Arboretum – so we were surrounded by lakes and trees. The trails were a combination of sand, dirt and grass, and there were a LOT of hills on the course. It was my first time running on anything other than asphalt, so it was pretty new for me – and pretty difficult. The results for the 10K and half marathon are shown below.  I’m pretty pleased with my time of 1:35:35. 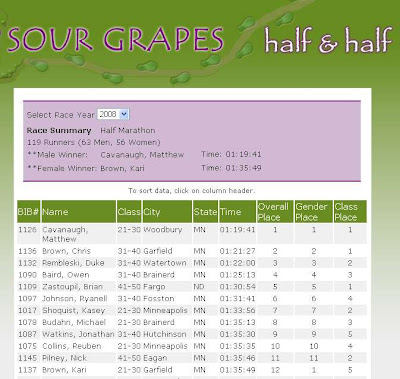 I’m signed up for a half marathon in several weeks and I haven’t been training at all! In fact, I’ve been running significantly less than usual because I’ve been so busy building a patio! ACK!

For those of you that haven’t seen this post , I recently ran in a 10K. I asked Mel to take some action shots while we were running, and I thought this one was really funny. I’m the one in the red shorts. I ran in the Golden Valley “Run The Valley” 10K this morning (in case you’re wondering, there is nothing particularly golden, nor is there really a valley in Golden Valley). Based on last years results, I went into the race hoping to place in the top 15. The official results haven’t been posted yet, but I believe I placed 13th with a time somewhere around 42-43 minutes. Here’s a photo of me ready for the race: And another one at the starting line: Here is me coming down the final stretch. If you ask Mel, she’ll tell you I got 11th place, but that’s only because she didn’t notice that right after she snapped this photo, the two guys right behind me zipped passed me, bumping me into 13th. 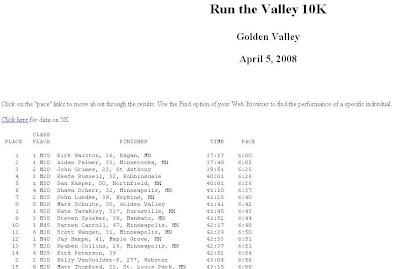 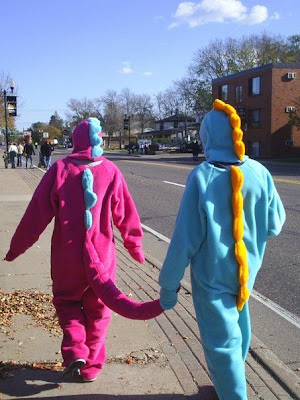 Melanie and I made some rad costumes for All Hallows Eve this year. We’re fuzzy dinosaurs. I’m a fuzzy blue and gold dinosaur named Roobasaurus Rex, and the pink and blue beauty next to me is Melasaurus Max. We are the most ferocious of creatures, and we also like dancing to “Closer to You” by Young Love late at night when we’re alone in her living room. Like I said……ferocious.

Friday night we went to a dance at church in our costumes, and realized that our thick costumes are better suited for trick-or-treating on very cold evenings than dancing in hot rooms, but it was still a lot of fun. We (arguably) had the raddest costumes there. You want to know the definition of cool? Dancing next to a “Plan of Salvation” flow chart.

On Saturday, we drove out to Anoka with T-Bert to participate in the Gray Ghost 5K race, a footrace where everyone is encouraged to dress up in costumes. Again, we realized that the thick material we used to make our costumes was not well suited for ventilation, so we were pretty hot after we finished. Anoka is a suburb just north of the Twin Cities claims to be the “Halloween Capitol of the World.” It’s not really, but I guess it makes them feel good to say it, so no harm done. It was a fun race. My favorite costumes were worn by a group of men dressed up as Spartans (think: the movie 300) complete with spears, capes, shields, and helmets. They ran in two single-file lines and would occasionally let out “Spartan Calls (grunts).” I don’t know what our plans are for All Hallows Eve, yet, but it will probably involve eating live humans and dancing to electro-pop. 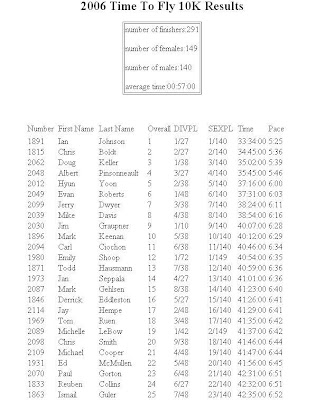