So y’all know that I’ve been complaining about my cell phone situation for a while now, but I finally got around to doing something about it.

Enter Virigin Mobile
I’ve long suspected that prepaid service was the best option for me, but I never realized that you could use smartphones on a prepaid plan (call me stupid – go ahead. Really.).  So when I discovered that $25/month at Virgin Mobile would get you unlimited text and data, and 300 minutes of voice, well that seemed like an obvious choice for me.  Not to mention cheap.

So what’s the catch?  There’s always a catch right?  Well one of the drawbacks is that you can only select from about a half-dozen phones, and you pay full-price for it.  I selected the Samsung Intercept: 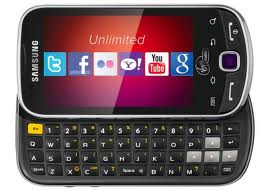 I received it in the mail last Friday, and have been using it around the house via wi-fi. It’s worked great, and it makes me feel smart to have a phone with a touchscreen.

But here’s the funny part: I’ve called the help desk numerous times over the past week, and they keep assuring me that they’ve “escalated the problem,” which is their lingo for saying they’ve bumped it up to a higher department.  Each time they say that I want to shout, “No, B$*#!, I’m about to Escalate this F*%@!#* Problem!” …but I don’t… because, well.. that wouldn’t accomplish anything, I guess.  But I do think it would be funny. Also, it’s funny that using their corporate lingo, the first step to solving a problem is to “escalate” it.  Someone from Customer Satisfaction Dept. should have caught that one – it just doesn’t sound right.

5 thoughts on “There’s Always a Catch”