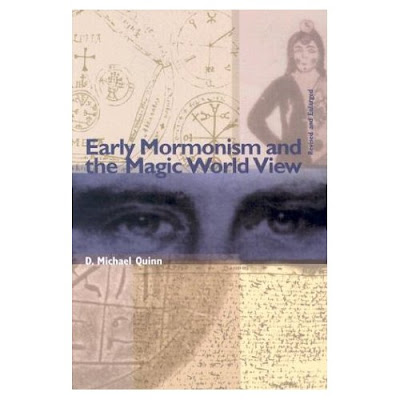 Anyone who studies the foundational stories of Mormonism (even casually) is likely to encounter information about Joseph Smith and his involvement with the occult and his belief in (and participation in) magic rituals.  Quinn solidly establishes that the entire Smith family and many of the early members of the LDS church held strong beliefs in occult practices, including treasure seeking, seer stones, divining rods, astrology, magical parchments, talismans, and other aspects of folk magic.

Quinn paints a complex picture of how involvement in folk magic influenced Joseph’s view of the world, and how these practices influenced the development of the early church.  Quinn argues that Joseph Smith and his family didn’t consider their involvement with folk magic to be at odds with their belief in Christianity.  Rather, searching for buried treasure and using seer stones was a critical part of how they practiced their Christian faith.

I feel like this book has provided me with some much-needed context surrounding the foundational stories of Mormonism.  The traditional accounts of Joseph Smith’s first vision, his thrice-repeated visitation from Moroni, his 5-year quest to obtain the gold plates buried in the earth, and his use of seer-stones to produce the Book of Mormon all make a lot more sense after reading this book.  Quinn establish the significance of each of these events to persons with a magic world view.

If you’ve ever been curious about the rumors about Smith’s belief in magic usually repeated by critics of Smith and the LDS church, then this book is the definitive source for setting the record straight.  Don’t be turned off by the near encyclopedic size of this book (650 pages???? wha…???).  Half of it is reference citations that will be of no interest to you. The book is also written in a way that makes it easy to skip a page here and there when Quinn starts to get bogged down with details that only serious historians will care about.  Overall, it’s a much quicker and easier read than I was anticipating and much more accessible to armchair historians than I was expecting.