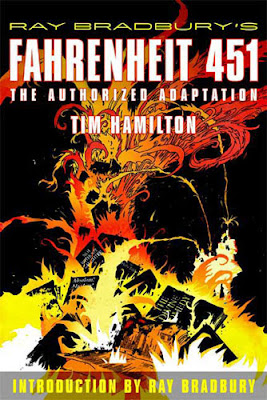 I picked up this graphic novel in Vienna to keep me occupied on the plane ride home.  I really enjoyed reading it. I don’t think I read enough graphic novels.

In the novel, Guy Montag is a “fireman” in a future year, where “firemen” go around burning books.  Book have been made illegal in this future world.  However, the novel is quick to point out that this isn’t a top-down government conspiracy to keep people in the dark.  Books are illegal because the people demanded that they become illegal.

In this future world, books began to take a back seat to other forms of media as attention spans shortened.  Television became more popular, stories became shortened and condensed, and the people could no longer stomach full-length novels.  In this futuristic society, comic books are the only books allowed because they are sufficiently dumbed down and provide plenty of pretty pictures for the now-weakened minds to digest.

The irony of reading this book in comic book format is absolutely hilarious.