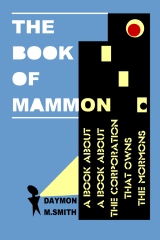 Smith tells the story about his time while employed at the Church Office Building (the “cob”, staffed by “cobbers”).  He was hired to do user research and evaluation within the Church’s Audio-Visual Department.  The book is packed full of his memories and experiences from his time there, including the events that led up to the corporate restructuring of his department that left him unemployed.  This would be a tragedy, except that by the end of the book the reader is convinced of at least two things:

1. Daymon Smith disliked working for the church immensely
2. Daymon Smith’s many talents (including his great humor) would surely be better appreciated elsewhere

The book is an exposé of sorts, meaning, Smith’s primary objective is to share what he feels are abuses of power or mismanagement within the Church, or that the Church has simply lost it’s way. Unfortunately, in an annoyingly coy way, Smith tells the story through a veil of fiction just thick enough to destroy any credibility the book would otherwise have had. For example, in the Foreward, Smith includes a letter written by himself (dated year 2011), in which he describes that the book you are about to read was not written by himself about his own church employment, but by a fictional character named Daemon (not Daymon) who worked at the COB.  The entire book is filled with references to supposedly fictional characters whom we are supposed to understand (with a wink and an elbow jab) are actually real persons and General Authorities of the Church.  Unfortunately, the veil was just thick enough (or I’m just dull enough) that at the end of the book, I’m really not sure what I’m supposed to understand was true and what was false.

Anyway, Smith’s primary assertion throughout the entire book is centered on the scripture Luke 16:13:

No servant can serve two masters: for either he will hate the one, and love the other; or else he will hold to the one, and despise the other. Ye cannot serve God and mammon.

The Church, he asserts, is trying to do just that – trying to serve both masters.  Trying to be the Kingdom of God while also embracing corporate practices not dissimilar from any major multi-national corporation.  Using examples from his employment at the COB, he shares many stories about how the Church operates.  He tells stories about smuggling garments into 3rd world countries, scandals in the Japanese translation office, and General Authorities encouraging members to buy new scriptures because the Church printing department has too much inventory and Deseret Book needs to increase sales.  He also asks questions about the types of cars given to General Authorities and Missionaries, subsidized lunches in the COB lunchroom, and the wholly corporate process that goes into producing church publications and materials.  According to Smith, there is very little that distinguishes how the Church operates from how any other for-profit corporation operates.  The only real difference between the Church and any other corporation, is that the Church isn’t nearly as efficient, since the Church isn’t financially accountable to its members (investors) the same way a corporation is accountable to its investors.

Ultimately, each reader will have to draw their own conclusions from the stories Smith tells.  Mostly, I’m frustrated that he didn’t just write a straight-forward book about his experiences.  He has some great material, but hiding it behind a veil of fiction (which I suppose he did for legal purposes…) just left me confused.

7 thoughts on “Book Review: The Book of Mammon”