I’ve been watching Buffy the Vampire Slayer for the first time, lately.  It’s against my better judgement – I’ve always avoided the show because I thought it was just another show whose popularity depended entirely on the fact that the lead actress was sexy.  And as I’m typing this, I’m thinking “Wait… that hasn’t stopped me from watching dumb shows in the past.”  So I’m not sure why I never got around to watching Buffy before now, but it comes highly recommended from several reliable sources. So I’m giving it a shot.

But tonight I watched the fantastic episode I, Robot… You, Jane where Willow falls in love with a demon over the innernet.  It’s fantastic because it’s packed with totally old school computer lingo that just hasn’t aged well – it’s like so many awful movies where someone is able to hack the innernet just by typing “HACK MAINFRAME” or something equally stupid.

Anyway, the best part is definitely when the character Fritz (one of the computer nerds) plays up the importance of the then fledgling innernet by saying:

HA! Well I’m happy to report that the Collins Household is totally Jacked In.

Meaning I physically put cat5e ports all over the house that we can stick jacks in.  They look like this: 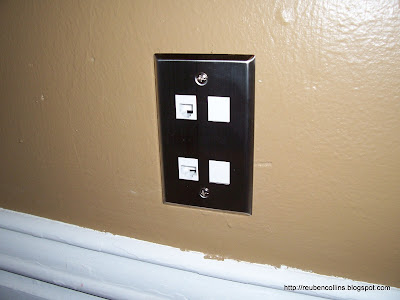 Do y’all like the chrome faceplate?  I thought it was classy.  And all the cables run to the basement where they all hook together on this fancy piece of plywood I hung on my basement wall: 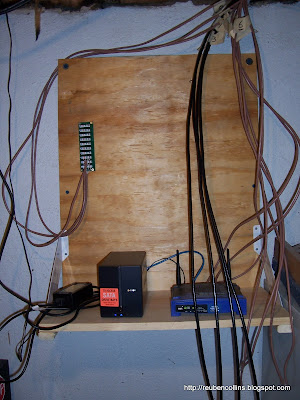 I’m still gonna clean the wires up a little bit so it isn’t such a mess, but the system is up and running.  Big thanks to my friend Jimmy who provided all the technical know-how for this project.

Jimmy : This Project :: Cloe Sullivan : Smallville (minus the gratuitous cleavage)

I’ve had a hard time justifying this project to the wife because it doesn’t actually give us any new capabilities. The internet worked just fine before I started messing with it, and it still works just fine now that I’m done.  It didn’t make anything noticeably faster.  The only visible benefit we get from this is that it allows us to move the cable modem, the wireless router, and NOS to the basement so they’re not cluttering up our dining room.  And I guess now we’re running Roku through a cable instead of wireless.

For all my hard work, I get comments like this from my wife:

“Haven’t you ever heard of wireless?” and “Hooray, we’re tethered to the wall!“

She might be right.  This might have been a stupid project (especially the part about running phone lines when we don’t even have home phone service). Oh well, at the very least, maybe when we try to sell our house potential buyers will think the house is super high-tech or something.

2 thoughts on “We’re Jacked In”