Most of you have probably heard about Nice Ride MN, the brand new bike sharing program in Minneapolis. I’ve been pretty excited about this for the past few months so I braved a rainstorm this morning just to get out and give it a test ride.  I won’t go into a lot of detail about the program since it has already been done by others, and because the Nice Ride MN web page gives a pretty good overview of the system. Instead, I’m going to tell you about my first-hand experience with the program from my ride this morning and my general first-impressions of the system.

My wife and I rode our own bikes to the nearest kiosk at the Midtown Exchange Building (yes, we see the irony of riding our own bikes to try out the bike-share program…).  The kiosks are clean, stand-alone, solar-powered stations that I think are kind of neat looking.  The advertisement on the end has a glass cover, and my first thought was “I wonder how long it will be before someone smashes the glass on that thing?”  Since the entire station is designed to be easily removed each winter, I don’t think it’s actually attached to the ground at all.  So the next thing I thought was “What’s keeping an unruly group of teenagers from just tipping this whole thing over, bikes and all?”  Nothing, I don’t think.  10 years ago, I def would have tried tipping the thing over. 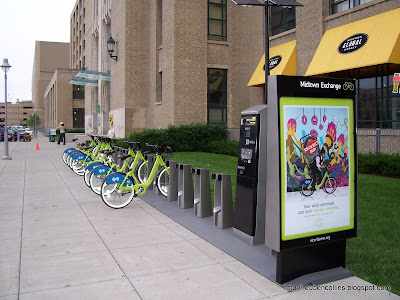 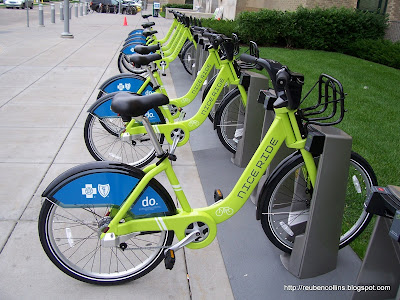 The user interface was usable, but it could use a little bit of improvement, I think.  There were few times when I wasn’t exactly sure what it wanted from me.  I slid my credit card and it asked me if I wanted one or two bikes – my wife and I wanted two.  At this point I thought, “What if we had a kid with us and we wanted three bikes???”  I think I’d have to come up with another credit card if I wanted a third bike – I wonder if this will be a challenge for families that want to use the system… 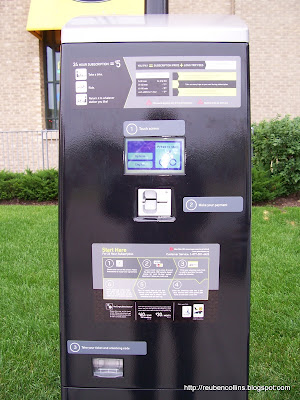 Probably the most ridiculous (but forgivable) parts was when it asked me to read and agree to the terms of service, which on the small touch-screen was an extraordinary 69 pages long!  Luckily you don’t have to view each of the pages – it allows you to just hit OK and agree. 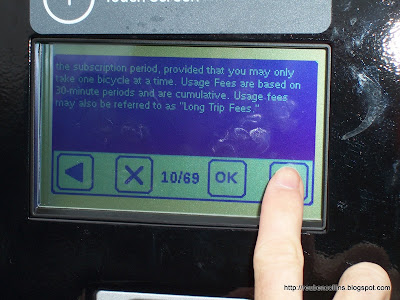 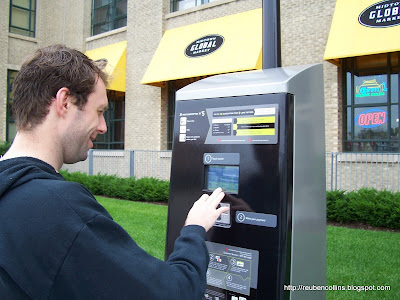 Now here’s where the system could use some improvement – after you agree to the terms, the kiosk gives you a 5-digit code that allows you to take one of the bikes.  After we printed our ticket that had the 5-digit code Mel and I looked at each other and thought, “So does this one code give us both our bikes?”  The answer is NO, IT DOESN’T. You have to swipe your credit card again if you want the second code – but the kiosk does not tell you this!!!  If someone rents two bikes, the kiosk should either give the user both codes at once, or at least inform the user that they will have to finish their transaction and swipe their card again to get the second code they just paid for.  Otherwise, they’re likely to make the same mistake Mel and I did, which was to assume that the one code the kiosk gave us would rent us two bikes.

Well this was where our day got a little bit interesting.  Turns out, Mel and I didn’t figure out at this point that you need two codes if you want two bikes because of what happened next.  I walked over to the first bike I saw, and I punched the code into the docking station.  I was a little turned off at first that it didn’t seem to give me any feedback as I punched the code in (no beeping, no lights flashing or anything), but when I pulled on the bike it came out of the docking station, so I just assumed I had done everything correctly. I handed the code to my wife, who entered the same code into a different station.  As she pushed the buttons, she DID get beeping noises and flashing lights in response, but she was also able to pull the bike out, so we assumed everything was ok – and that my docking station was just busted because it didn’t beep at me (we later learned that this assumption was not correct). 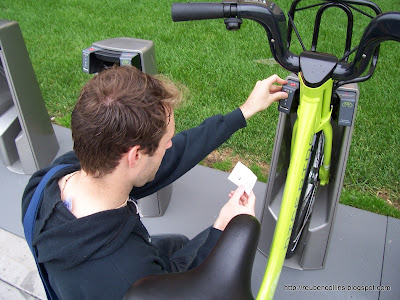 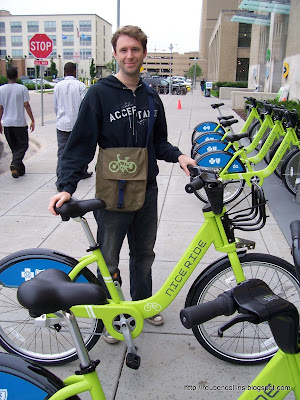 But beeps or no beeps, we had two bikes in hand, so we set off for the Midtown Greenway for a leisurely ride to uptown.  The bikes felt pretty good.  They were comfortable & easy to ride.  The seats are easy to adjust, and we like the built-in bells on the handle bars.  They are three-speed bikes, geared extremely low (that means they’re really easy to pedal).  I was in 3rd gear (the highest gear) most of the time on the greenway, which means that if I was interested in going faster, the bikes probably wouldn’t have delivered.  For a minute, I was wishing it was geared a little bit higher, but when we got to the steep ramp at Bryant Avenue, I was happy to have that 1st gear again.  So I expect the gears are quite sufficient for the majority of users.  I’m curious to see how the headlamp and rear LED flashers will look at night – you know, if they’ll be bright enough. 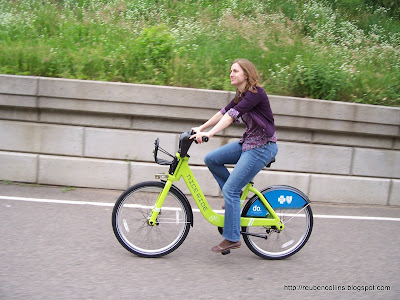 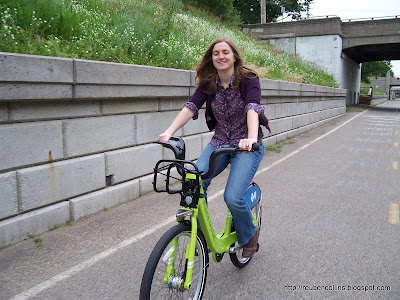 At Lake & Lyndale, we wanted to try swapping the bikes out for new ones, just to test out how easy it was to return the bikes and get some new ones.  This is where our problems started…

When we tried to dock the bikes, Mel’s snapped right into place, she got some flashing lights letting her know everything was OK.  My bike, however, wouldn’t lock into place in the docking station. No flashing lights, no beeps.  I would jam it in the docking station, but then I could just pull it right out again.  I couldn’t figure out how to return the bike.  So I called the help number on the bikes and explained to the operator that I was having a hard time returning the bike.  She tried to convince me that I was just doing it wrong, but after I explained that I had just watched my wife return hers without any problems and that I was doing the exact same thing – it just wasn’t working, she told me to sit tight and they’d send a technician out. 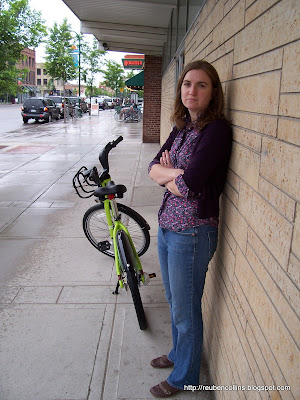 Within 15 minutes, a friendly technician named Josh pulled up in a pickup truck.  He spent a few minutes tinkering with things and agreed that something was not working correctly.  I mentioned that it was strange when the docking station hadn’t beeped at me at all when I removed it from the docking station back at the Midtown Exchange Building.  He ultimately decided that the bike I was riding “wasn’t in the system” (whatever that means) which is why none of the docking stations would recognize the bike.  So when I had initially gotten the bike, I probably didn’t need any code or anything – I probably could have just pulled it right off the rack and ridden away with it.  Josh apologized for the confusion, and helped us to retrieve two more bikes from the system.  Turns out, Josh wasn’t up to speed on the details about needing two tickets to get two bikes either – but after some trial and error, we figured it out together.

After that, we rode our bikes back to the Midtown Exchange Building, where we returned our bikes easily and according to plan.  I also discovered what is now my favorite part of the system – if you line yourself correctly, you can just ride the bike right into the docking station.  No need to dismount and then dock the bike – just glide right into the docking station.  Actually, this is probably pretty rough on the equipment, so you probably shouldn’t do it – but it is fun. 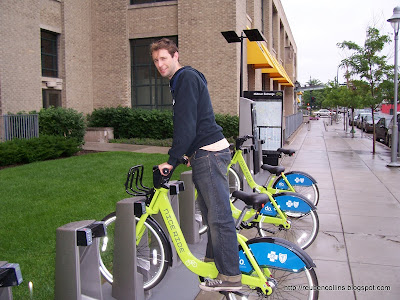 At this point, we had our second encounter with Josh the friendly technician. Apparently the Nice Ride MN offices are located in (or near) the Global Exchange Building, so we ran into him in the parking lot.  He gave us some free Nice Ride MN t-shirts and socks and apologized again for the confusion.

So my final evaluation?  Aside from all the confusion about my bike not actually being “in the system,”  it was a pretty pleasant experience.  I don’t mean to give the impression that the system is buggy.  The bikes are solid and comfortable, and the kiosks are easy to use. I have high hopes that the system will be successful and encourage new riders to get out on bikes!  Two recommendations for Nice Ride MN that would have made it a better experience:

So have you tried it yet?  How’d it go for you?