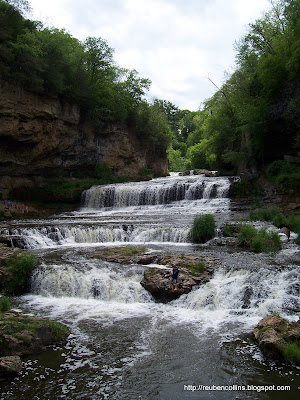 I told y’all about how last Saturday Mel and I tried to go bike camping at Willow River State Park but our plans changed after it rained on us all day.  We woke up on Sunday feeling a little bit defeated, and we also didn’t really want to go sit on hard metal chairs for two hours, so we decided just to drive out and see the park instead – We weren’t disappointed.

Willow River State Park is located just across the Wisconsin border – and it’s an easy 1 hour drive from the heart of Minneapolis.  There’s a dam along the Willow River in the park, so it creates a large, beautiful lake.  There’s also some pretty manicured lawns and a little beach area (and a full playground – not exactly wilderness out here…).  The most spectacular feature, however, is Willow falls – pictured above.  The falls are much larger in person than the photos suggest.  It’s definitely worth seeing.  There’s also a set of stairs up to the top of some rock bluffs where you can look out over the falls and the lake.  The view is pretty phenomenal.  Check out the photos I snapped along the way:

After we had finished checking out the State Park, we decided to check out downtown Hudson, WI, a cozy little town along the St. Croix River.  We decided to stop in for lunch at The Winzer Stube, a German restaurant that was apparently voted the 17th best German restaurant in the US and received a “10 beer stein” rating (ahead of South Minneapolis’ beloved (but pricey) Black Forest Inn, which was unranked and received only 9 beer steins) in what I’m sure was a very scientific and unbiased evaluation.

Anyway, that’s what I did Sunday.  What did you do?  Ever been to Willow River State Park?  How about the Winzer Stube?  What did you think?

[edit: we decided to check out Willow River State Park after reading about it here.]