Guess who photobombed David Archuleta tonight??????  I’ll give you a hint: 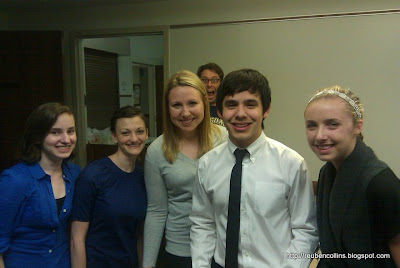 So I was spending my Friday night the way any good Mormon would – hanging out at the LDS temple in Oakdale, MN.  As always, all the teenagers were hanging out at the baptismal font when all of a sudden the room became electrified.  People started getting excited and heads started turning.  This was a familiar scene I remembered from my own teenage years at the baptismal font.  Back when I was a teen, it meant that one of the girls’ wet, white jumpsuits was a little more transparent than it should have been.  That would light up a pew of 15 year-old boys like nothing else.  But that wasn’t the case this time – luckily, they’re making the jumpsuits out of much thicker material these days.  This time, it meant that David Archuleta had just entered the room.

Actually, I wasn’t even in the temple when he showed up.  I was across the street playing kickball with all the kids whose parents were at the temple.  Turns out, somebody’s got to be the babysitter, and for a lot of reasons, kickball is more my style.  So while I was across the street kicking around a blue rubber ball with some 5 year-olds, my wife and the teenagers were fawning over Mr. Archuleta while they were supposed to be communing with God.

So what’s a dude like David Archuleta doing in the LDS temple in the Twin Cities on a Friday night?  Just performing vicarious ordinances for the dead, obviously.

After all the religious stuff was over, everyone (including me and the 5 year-olds) hung out for a while and ate pizza, and Mr. Archuleta was there, too.  I didn’t actually talk to him because he was constantly surrounded by a group of at least 5 excited ladies at all times, but it’s just as well.  I don’t know what I’d say to him anyway.

“So, uh, David.  You were on American Idol or something, right?  Did you win?”

He seemed like a really nice guy, actually.  And if I sound a little snarky towards him, it’s only because I’m jealous that he looked good in his skinny pants tonight and I had to throw all my skinny pants away a few months ago because they don’t fit anymore.