A couple weeks ago, a friend told me that she was in the market for a new mixte bike and asked me to dig up a few options for her.  Like most people, she’s looking to spend as little as possible, but she’s also willing to pay for quality.  She’s attracted to the idea of internal gears.  She places a high value on aesthetics, and extras like color-matched fenders, chain guards, and rack systems are a bonus.  In this post, I hope to provide a catalog of mixte bikes and frames currently available.  Here’s what I came up with, in no particular order: 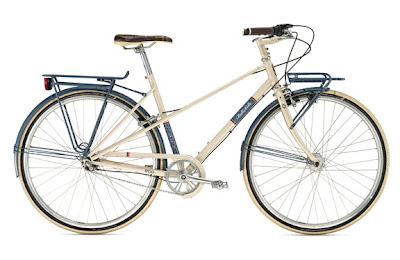 This is a pretty sharp looking steel-framed 3-speed bike.  It comes in only one color (gull white).  It’s got Shimano Nexus 3-speed internal gearing, and the front hub is a dynamo that powers the built-in headlamp.  The modest $660 price tag includes the extras like the fenders, racks, and chain guard.  This looks like a very solid option.  I also like the two-tone feel to this bike.  I’m also a big fan of the seat and handlebar grips they’ve chosen and the stable 700 x 35c wheels. Trek doesn’t publish the weight of their bikes.  Note how the bottom supports for the front rack attach to the front fork about halfway down the front fork (as opposed to attaching  near the front dropouts (where the front wheel attaches to the fork) – I’m a big fan of this system as well (for no reason in particular). 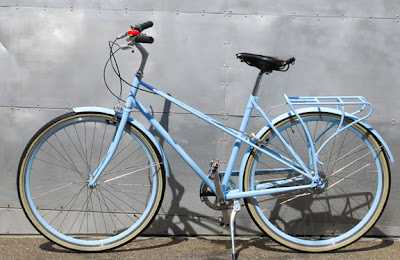 Public Bikes makes both a 3 and 8-speed version of the steel-framed Mixte, which comes in a variety of  monotone frame colors.  The drivetrain uses a Shimano Nexus internal gear hub.  Aesthetically, I like the color-matched rims, fenders, and chain guard.  The color-matched rear rack is nice too, although it’s a little too curvy for my preferences.  Aesthetically, I’m also not blown away by their choice for the handlebars.  At these prices, though, the M8 is clearly the front-runner for mixte’s with more than 3 gears. The frame includes eyelets for a front rack system, although Public doesn’t appear to make a color-matched front rack – so if you add a 3rd party rack, it won’t match the rest of the bike.  Also note that the rear rack is not included in these prices.  It costs an additional $45.  With only $140 separating the 3 and 8 speed version of this bike, I really can’t think of any reason to buy the M3 instead of the M8.  It weighs in at a hefty 31.7 lbs and features 700 x 35c wheels. 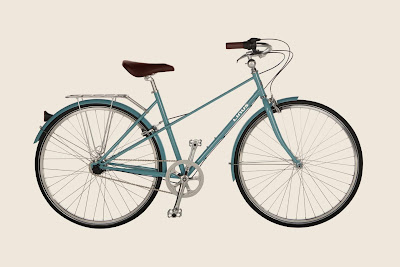 The Linus Mixte is a beautiful steel frame that comes in three colors.  The color-matched fenders are beautiful, as are the seat and handlebar grips.  The Linus is also offering genuine Nitto North Road handlebars – my handlebar of choice for any bikes I’m building these days.  The bike lacks a chain-guard, but it includes the minimalist rear rack.  The rear rack looks pretty lightweight – so it should not be confused with a heavy-duty touring rack, but it is probably quite sufficient for anything you’d want to carry on this bike.  The frame includes front eyelets for the addition of a rack in the future, although it doesn’t look like Linus currently makes one to match the bike or the rear rack.  The drivetrain features a Shimano Nexus rear hub, and the wheels are 700 x 32c. 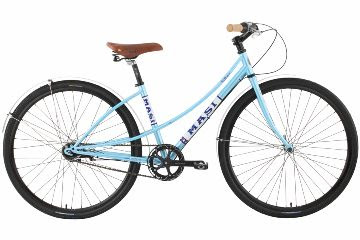 The Masi Soulville is obviously a little bit of a twist on the traditional mixte frame, introducing some interesting sweeping curves into the frame geometry.  The Masi doesn’t offer much in terms of color-matched accessories – no racks or chain guards in sight.  It has fenders, but they’re a little bit more of a modern design than the other mixte’s.  The frame features eyelets for both front and rear racks.  It does, however, come in a Shimano Nexus 7-speed variety.  The cork grips are an interesting touch, and the roller brakes are a throwback feature that I expect many customers won’t appreciate.  The chainring and crank arms are a little higher quality than some of the other mixte’s out there, but again, many potential customers probably won’t notice and/or care.  The 29.8 lb Soulville is a relatively poor showing based on the criteria my friend has selected. 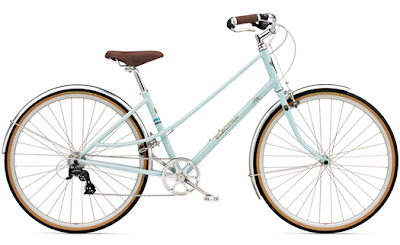 The Elektra Ticino stands out from the crowd of mixtes because of the standard drive train.  It’s the only mixte I found that uses a traditional derailleur and thumb shifter.  The aluminum frame deviates from the traditional mixte geometry by adding a bit of curvature.  Elektra offers 7-speed, 8-speed, 16-speed, 18-speed, and 20-speed versions of this bike  Only the 7 and 8-speed versions are really comparable to the other mixtes here.  700 x 32c wheels.  The frame looks nice, and the fenders are sharp looking as well.  I think (don’t quote me) it has eyelets that will allow front and rear racks, although I don’t think Elektra offers anything color-matched or designed specifically to fit this frame.  Really, you will either love or hate this bike based on the traditional derailleur system. 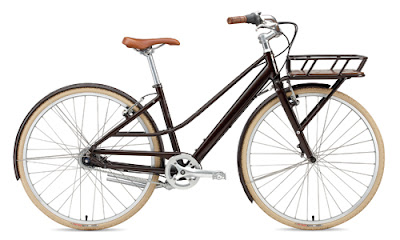 Specialized offers a pretty competitive package in the Live 2 Mixte.  The frame is aluminum, which means it’s probably a little bit lighter than some of the steel options.  It only comes in one color – Terra Brown.  It utilizes the Nexus 8 internal gear system.  The frame is a little bit of a deviation from the classic mixte design.  The highlight of this offering is the fantastic front rack, which is color-matched and has a wood base. The color-matched fenders and chain guard are fantastic as well.  Oddly, there doesn’t appear to be a matching rear rack, a significant omission.  The faux-leather seat and handlebar grips are a nice touch as well.  Wheels are 700 x 32c.  I don’t know if I’m a big fan of the oversized down tube, though. 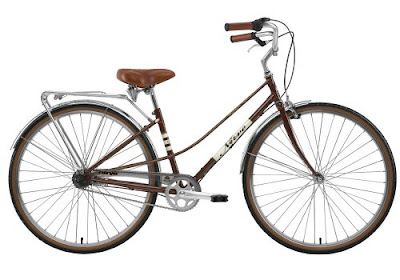 I don’t know much about the Nirve Wilshire – the website isn’t very hepful and doesn’t say much about the specs.  It’s got 3-speed internal hub gearing – probably the Shimano Nexus (but I’m guessing).  Aesthetically, this bike looks a little bit old-school.  I’m not sure what it is about it, but it sort of shouts “granny” at me.  None of the accessories are color-matched, although the fenders are a smart-looking chrome.  The chainguard, however, leaves something to be desired aesthetically.  The seat looks big and cushy, and it comes with a rear rack already installed (although it doesn’t look like the sturdiest rack I’ve ever seen.  Overall, I suspect you get what you pay for, and at only $480, it’s hard not to like it.

Frames Only
There are a few fantastic mixte frames out there that don’t come as complete bikes.  You’d have to buy the frame, and the components separately and cobble it together to make a great bike.  This is a great approach if you want total control over what components end up on the bike.  The downside to this is that you’re guaranteed not to find color-matched anything, but you can still create some great looking bikes.  Here are the standouts:
1. Soma Buena Vista, $500 (probably my favorite mixte frame) 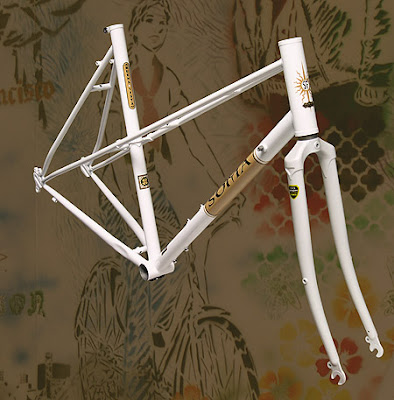 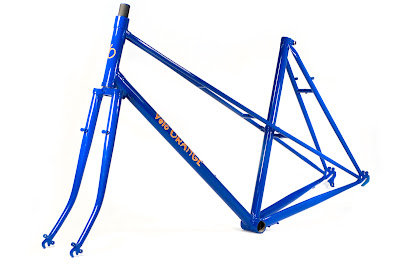 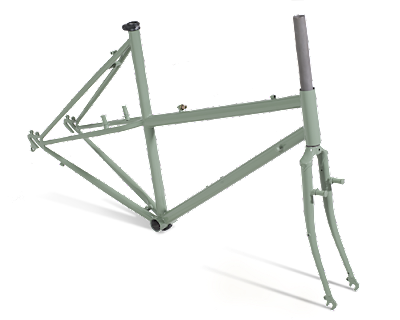 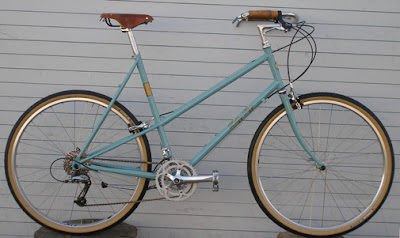 Want a Different Gear Set?
A lot of these mixtes are 3-speeds. A lot of folks, though, will be interested in having more than 3 gears. The thing is, any one of these shimano nexus 3-speed systems could easily be swapped out for a shimano nexus 7 or 8-speed system pretty easily. If the frame you want comes stock with a 3-speed system, and you’d rather have the 8, find a way to make it happen. First I’d try working with a local bike shop. Tell them exactly what you want and ask what it will take to make it happen. The 8-speed systems are more expensive than the 3-speed systems, so you should plan on having to up the price a little bit plus whatever the shop charges for their troubles. A good bike shop will be willing to make a deal with you so that they essentially buy the 3-speed system from you after you buy the 7-speed system from them – so you really only pay the difference between the 3 and 7-speed systems. Also, some of these smaller manufacturers, like Linus may be willing to just build you an 8-speed version from the start if you contact them directly.

OK, well that’s all the mixtes I came up with in my search.  I hope this post was helpful.  I’m sure I missed some. If you know of any mixtes that I missed, let me know, I’ll add them to the post.