I finished up my taxes this evening and I’m pretty excited about it.  This is a lot later than I usually file.  Usually I’m done spending my tax return by the end of February.  I guess I’m just lazy this year.

My usual strategy for filing taxes is to use two or three different online tax preparation thingys, and then I e-file whichever one gives me the biggest return.  Yea, I know.. it shouldn’t matter which one I use, it should turn out the same regardless.  Except for that it doesn’t.  This was especially true while I was still in college and some preparers found creative ways to get me more tuition deductions than others – probably illegally.  But I don’t know the difference, and I’m comfortable arguing that I don’t know the difference if I’m ever audited – since it would be the truth and all…

Anyway, I only filled out one online return this year, and I’m not very happy about it.  My federal return was way smaller than last year.  And Oh My Gravy the State of Minnesota thinks I owe them $15.  And wouldn’t you know it, but TaxACT wouldn’t let me e-file since I owed them money.  They made me print it out and MAIL my Minnesota Taxes.  Yea.  MAIL.  ON PAPER.  What is this? 2006????

Oh well.  At least it gave me a chance to use my bacon envelopes: 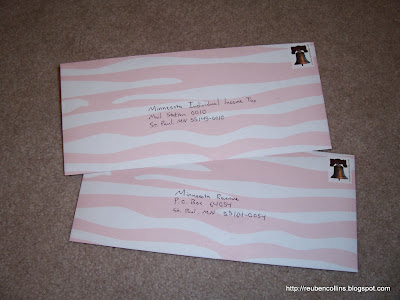