I’m starting to look forward to the next home improvement project, which will probably be replacing three small windows in the basement.  The current windows are basically inoperable.  The two that are currently closed won’t open, and the one thats currently open won’t shut.  It may be a tricky project, though, because the reason two of the windows won’t open is because they’re currently helping to hold up my saggy old home!  So I could really use some advice from the great wise interwebs about how to approach this project.  If you’ve got any tips, I’d appreciate if you let me know in the comments.

But first, since I know not all of my readers (including myself) are up to snuff on their construction terms, let’s do a little review of the part of the home known as the sill plate.  As shown in the graphic below (which I stole from Fore Front Home Inspections), the sill plate sits on top of the foundation.  The floor joists & band joists, and subsequently the rest of the entire house, rests on top of the sill plate.  So it’s important, y’all.  What I’m trying to get y’all to understand is that the sill plate is supposed to be supported by the foundation (as opposed to, say, a piece of glass…) 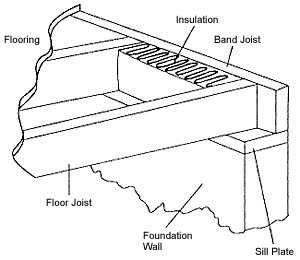 OK.  Now that we all know all about sill plates, let’s look at some photos of how my house was constructed. The sill plate on my home appears to be a 1×6 or 1×8 (instead of the more modern standard of 2×6 or 2×8).  The three windows in my basement are cut right at the top of the foundation, leaving nothing left to support the sill plate.  Take a look: 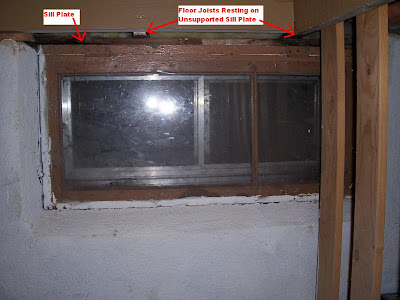 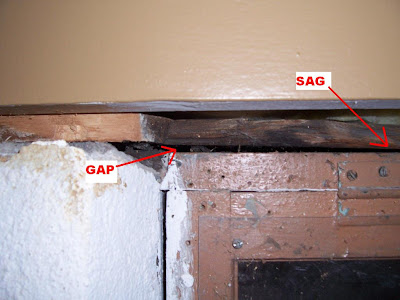 The sagging sill plate creates a gap between the window frame and the sill plate towards the edges.  And yes, if you’re wondering, cold air gushes through that gap at the corner of the window.  The same sag is visible in the following two photos from my basement as well: 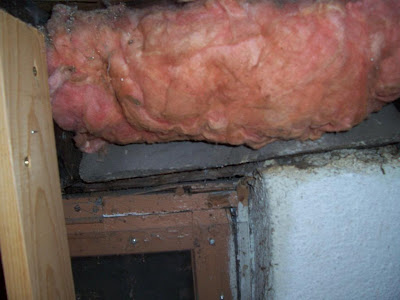 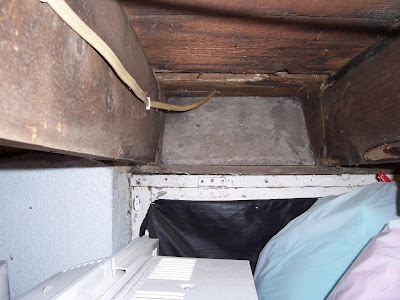 Now, before we go hating on the peeps that constructed my house back in 1905, we should remember that nearly every home in South MPLS was constructed the same way.  If you live in South MPLS, head down to your basement and see if you can recognize the something similar.  Also, total sag after 100 years is only about a 1/4″ – not exactly critical… the rest of the house is WAY more wonky than these joists….

So all this leaves me with a few key questions that I would love to have some help answering from the all-wise interwebs:

1. Anybody got any great ideas about how I should try to construct some sort of header in this small space so that the new window isn’t supporting any weight?  This is probably one of the main reasons why these windows are commonly replaced with square glass blocks (I’m hesitant to call those blocks “structural”, but they’ve gotta be stronger than some new vinyl window…).  Obviously, I’ll want to temporarily support those floor joists while I’m replacing the windows…

2.  When I replace the windows, do y’all think I should try to jack the sagging sill plate back up into it’s original location, or should I just embrace the sag and try to support it where it currently is?  My biggest worry about lifting it back up into place is that doing so would probably cause lots of problems elsewhere (cracking walls, doors that won’t shut, windows that won’t slide very well, etc.)  I’m not sure it’s worth it, especially since Mel and I aren’t planning on living here forever – at some point we’ll be moving on to bigger and better homes.

4.  You may notice in a couple of the photos (especially the last one) that there are concrete wedges on top of the sill plate between the floor joists.  Any idea what this is?  It’s actually a mound of dirt piled on top of the sill plate covered in a sheet of concrete.  What the heck is this all about?  Was this just an early version of spray foam trying to insulate that space?

5.  Finally, when I install the new windows, do you guys think I should stick with the combo storm window / interior window setup I’ve currently got?  Or is  a single, newer window going to be good enough?  I really like the idea of being able to open these windows.

Finally, as I hang my head in shame, take a look at this last window from my basement: 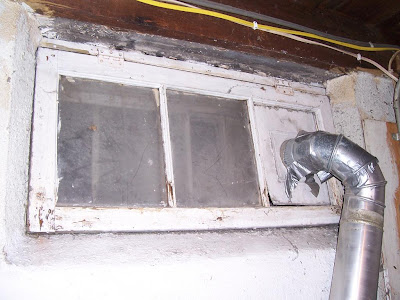 Now if that dryer duct through the window isn’t classy, I don’t know what is.  The duct tape falling off just adds a special something.  Observant readers will notice that sagging is not a problem with the sill plate above  this window since the window is parallel to the floor joists, and is thus not supporting any weight.  Also, a related project will be re-routing that dryer duct so that it’s not venting through the window.  And yes, freezing cold air is gushing through this window as well….