However, new data has been discovered that may warrant revisiting the previous conclusion.  On Sunday, January 31st, 2010, Melanie was observed to produce the following breakfast for me: 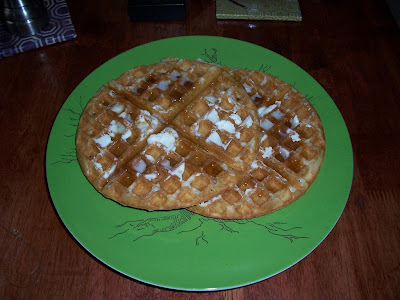 This breakfast specimen was produced without provocation, and without expectation of payment.  Various tests, including but not limited to taste & smell tests, confirmed the phenomenal and remarkable nature of the specimen.  I determined that the breakfast specimen was of exceptional quality and tastiness, more spectacular in quality and tastiness than I have previously observed in any waffles.  The specimen provided marvelous sustenance that continued to provide energy throughout the excruciating 3 hours of church that followed soon thereafter – a feat not previously accomplished by any other breakfast, save biscuits & gravy w/ bacon.

After reviewing the new data, and once again partaking of the uncommon comfort provided by said snuggie/slanket, it is determined that the previous conclusion demands revision.

It is Resolved:  I definitely have the coolest wife ever.