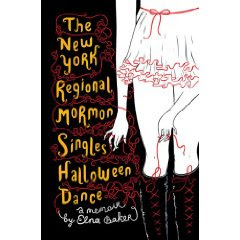 Elna Baker has collected many of her popular stories that she’s been performing all over New York and presents them together as a single, cohesive memoir about being a Mormon in New York City. I’d seen some youtube videos of the author performing some of her stand-up comedy and had really enjoyed it – and the printed version didn’t disappoint. The book is a very quick & easy read – I read the entire book in less than a week, which really says a lot about how much I enjoyed reading it. Baker is a talented storyteller, and the honesty of her memoirs is endearing.
On the surface, Baker tells stories about dating, and her quest to find a boyfriend, but the book is ultimately about her relationship with God. It’s about how her Mormon faith has shaped her decisions, and how her decisions have subsequently shaped her faith. She describes how her faith evolves over time, and how she even loses faith altogether. Ultimately she finds her faith again, but it’s a much different type of faith than she once had.
From the dedication page:

Mom and Dad,
I could never have done this without your faith, support, and constant encouragement. Thank you for teaching me to believe in myself, in God, and in my dreams.
This book… aside from the nine F-words, thirteen Sh-words, for A-holes, page 257, and the entire Warren Beatty chapter… is dedicated to you.

If that doesn’t tell you that this is no ordinary LDS memoir, I don’t know what will.
Baker does her best to present a narrative that is accessible to non-LDS readers. I think she’s mostly successful, although I expect non-LDS readers will not be able to fully appreciate exactly how and why her faith plays such an important role throughout the book.
Also, I like it anytime a Mormon is successful – especially non conventional Mormons. I don’t know why, I just do. So buy the book.