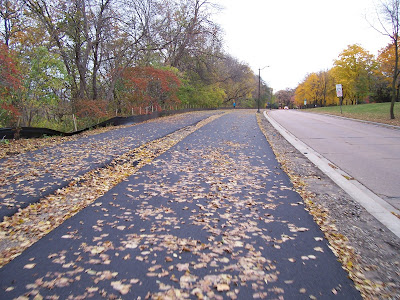 I went on a leisurely bicycle ride down West River Parkway today and snapped some photos while riding. The Minneapolis Park & Recreation Board is in the process of reconstructing the corridor. There are still signs of construction, but the bike and pedestrian facilities are already in place in what I assume is their final state. I’ve been really excited about this project – the old bikeways along West River Parkway were in pretty poor shape.

For the most part, the new trail is great. The new pavement provides a much smoother ride than the old pavement. The ornamental streetlights are attractive, and as near as I can tell, there won’t be any more street signs placed right in the middle of the bikeway anymore. Here’s a slideshow of the photos I took today:
There were a few things that I would have done differently:
1. There are a few locations where I would have removed a few trees to avoid awkward curves in the trail. I appreciate that the MPRB tried to preserve as many trees as possible, but in some instances, the new trail suffers because of it. In the long run, we would have been better off removing a few trees now and planting twice as many new trees in more appropriate locations to replace them.
2. There are a handful of parking lot access points along the roadway where the bikeway and the roadways intersect. In all these locations, the automobiles are given preference over the bikeway users, despite the fact that the bikeway users vastly outnumber the parking lot users. At each crossing, cyclists will have to ride through two access ramps and over two concrete curb strips – clearly entering “automobile space” as they do it. A much better design would have provided cyclists with an uninterrupted pavement surface (or at least one without ramps and curbs) that requires cars to cross the “bicycle space.” Such a design would be safer for all users.
3. The bicycle and pedestrian facilities are separate throughout the corridor, although they combine frequently when limited space requires. Some of the areas where the combinations and separations occur are a little bit awkward.
So what do you think of the new design? What do you like? What would you have done differently?