Our latest adventure was a 110 mile bike ride in southeast Minnesota along the Root River State Trail and Harmony-Preston Valley State Trail. Our adventure started Saturday morning as we packed up the car and stopped at Arby’s on our way out of town for some mid-morning lunch. Our plan was to park the car at one end of the trail, bike to the other end, camp, then bike back the next day – so we’d have to carry all our camping gear with us. But while we were eating lunch, we realized that neither of us were really all that excited about carrying gear with us, that the bikes we were bringing were ill-equipped for such a thing, and that we’d both be just as happy parking in the middle of the trail so we didn’t have to carry our stuff with us (huzzah!). So that’s how we ended up in Lanesboro, MN, which is pretty much at the center of both trails (trail map).

Lanesboro is a pretty typical small town, but it was surprisingly active with trail riders and such. The trail cuts right through the middle of downtown Lanesboro, so there were tons of people on bikes everywhere (not shown in photo). 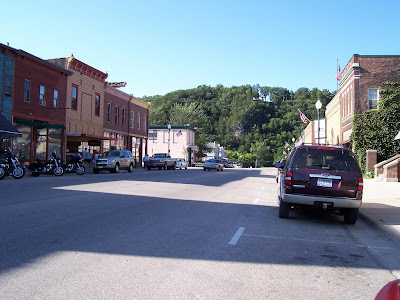 We decided to camp right in the city park in town because we were already there and it was getting late – and because the trail system web site isn’t really very helpful at helping you understand what your camping options are. Pretty much, camping is just sort of a free-for-all along the edge of the city park. You pay $10, and then just set up your tent anywhere you want along the edge of the park – along with everyone else. There aren’t any organized camping sites, which means the tents are as close together as you want them to be. When we set up our tent, there weren’t very many other people there. By sundown, though, it was pretty comical how many tents were crammed into this little strip of grass. The tents were practically touching each other…. Here’s what it looked like before it started getting crowded (picture about twice as many tents for the after-scenario): 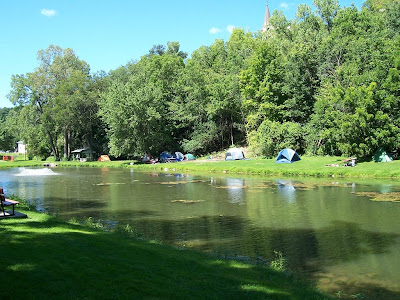 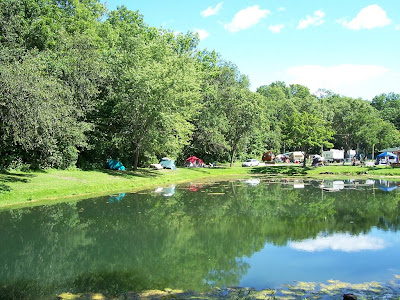 Turns out, though, I sleep like a rock. So it didn’t bother me any. Mel had a tough time sleeping, though. The funniest part was that each of the several dozen tents had their own campfires – so there were at least 30 campfires going in this little park that evening. The whole town was really smoky.
After we had set up camp, we started our cycling. We cycled to Fountain, MN, which is the western terminus of the Root River Trail & about 11.2 miles from Lanesboro. This section of the trail is pretty nice. Most of it uses an old railroad right-of-way, so it’s mostly pretty flat. It was a steady uphill from the trail junction (where the Root River and Harmony-Preston Valley Trails meet) to Fountain, which means a smooth-sailing downhill on the way back, which was really fun. We turned south at the junction and cycled on to Preston, MN, about 12.0 miles from Fountain. The trail section from the junction to Preston is probably one of the most beautiful sections of trail in the whole system. It’s entirely an old railroad right-of-way and you’re pretty close to the river the whole time. Then we cycled down to Harmony, MN, about 12.3 miles from Preston and the end of the Harmony-Preston Valley Trail. We didn’t really enjoy this section of the trail too much. It might have just been that we were tired, or that it was getting late, or that it wasn’t along a railroad right-of-way, but it just wasn’t as scenic (to be fair, we ran into another cyclist who said this was his favorite section of the trail…). But it does have this great section with some cows, and mel made friends with Oklahoma Oscar: 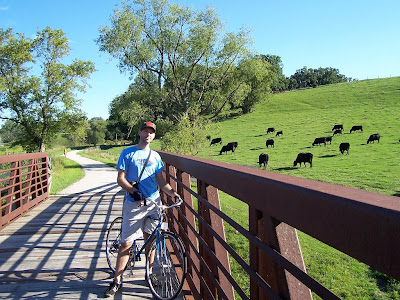 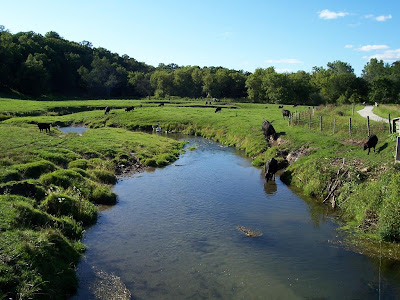 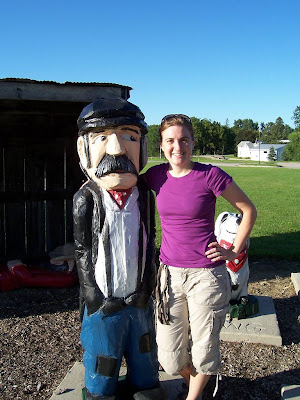 At any rate, when we got to Harmony, we wanted to get home quickly, so we opted to ride the highways back, 13.6 miles instead of the 22.5 mile trail route. We were a little hesitant to ride on the highways at first, but US 52 is actually an Amish Buggy Byway, so the shoulders were extremely wide. Here’s Mel pretending to be an buggy: 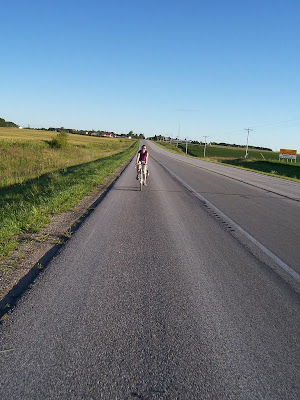 Plus, TH-16 heading into Lanesboro has a HUGE downhill section we got to ride down that was probably my favorite part of the whole weekend. Seriously, I recommend riding the trails to Harmony, but taking the highways back – just so you get to ride the giant hill! Day one: 49.1 miles.
We ate dinner Saturday night at Rhino’s Pizza & Sub Shoppe & received some pretty snarky service from one of the employees, who was visibly unhappy to see us (& the other 8 customers who walked in with us) since it was 8:50 PM and they close at 9:00. I gave an extra dollar tip, hoping that she wouldn’t spit on my burger, but I’m still pretty sure she wasn’t very happy with us. Our burgers were surprisingly tasty, though, and I’m pretty sure she didn’t sabotage our burgers or milkshake, so a thumbs up to Rhino’s (in a this-is-the-only-thing-open-on-a-Saturday-night-in-Lanesboro-at-8:50-PM sort of way). 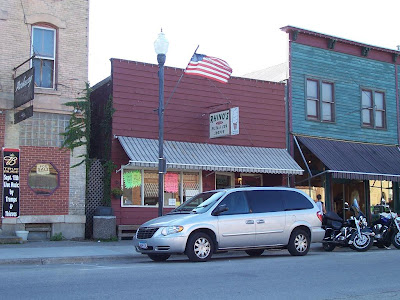 We got an early start on the trail on Sunday, this time headed east. We passed through the towns of Whalan, Peterson, and Rushford, MN, before arriving Houston, MN, around lunch time, a total of 31.1 miles. This section of trail is really nice – especially through Rushford where the trail is all along old railroad right-of-way and stays pretty close to the Root River. Here are some photos of us on the trail: 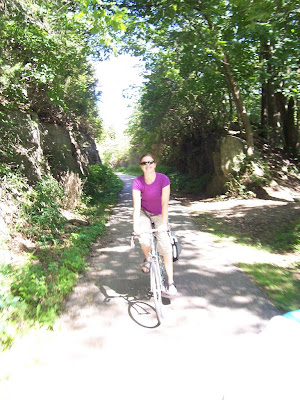 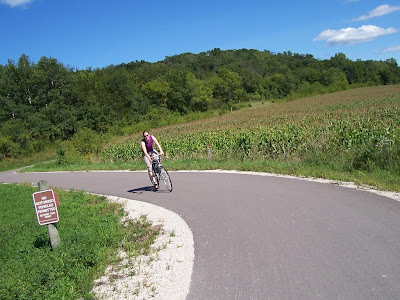 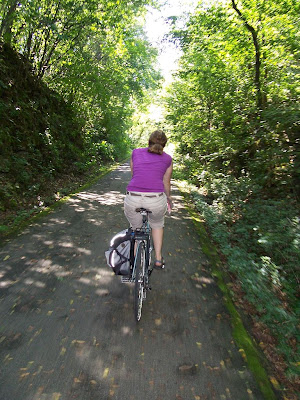 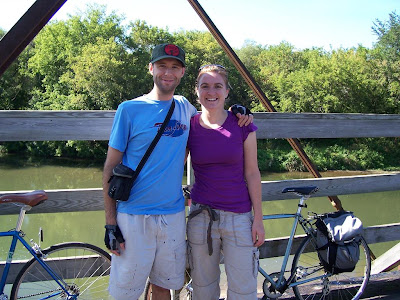 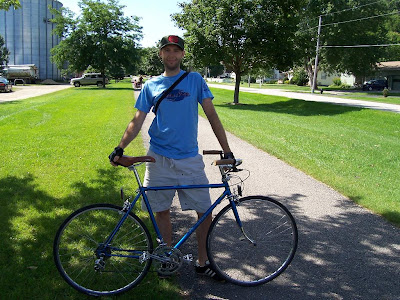 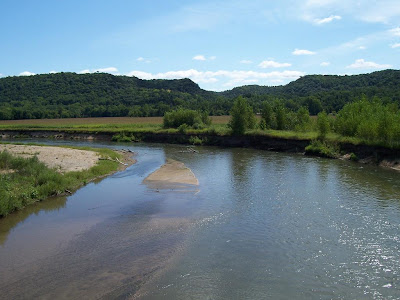 In Houston, we were pretty hungry for lunch, so we quickly found The Brickhouse, which looks small from the outside, but is surprisingly large on the inside. Unfortunately, they didn’t have any soups, but the grilled cheese + bacon was superb, and Mel’s chicken wrap was pretty good, too. Lunch for two including sodas for a measly $11 was fantastic, so another thumbs up for The Brickhouse in Houston, MN. 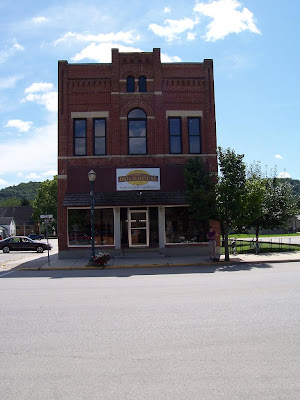 After lunch, it was just 31.1 miles back to Lanesboro before packing up and coming home. Day two: 62.2 miles. Trip total: 111.3 miles! Great weekend for a bike trip!