Our second adventure for this past weekend was a canoeing trip down Minnehaha Creek. Minnehaha Creek is a very urban stream that runs right through the heart of South Minneapolis. It’s by far the smallest stream Mel and I have ever canoed. Because it’s so small and the current is faster than many rivers in Minnesota, we expected it to be really easy. We were wrong, though. There were so many tree branches hanging down into the water that it was really difficult to avoid them all – especially with the current pushing you along pretty quickly. So we ended up with a few scratches from hanging tree limbs and such. But it was still a lot of fun. We started in Edina in Pamela Park and finished in Lake Hiawatha in Minneapolis. 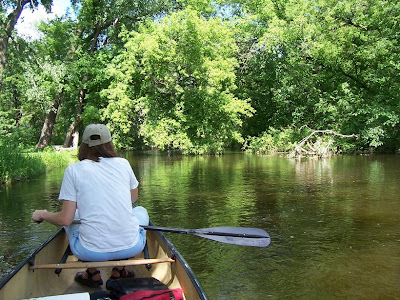 The trickiest part of our adventure, though, was the logistics of taking ourselves camping. Here’s how it worked. We loaded up the bicycles and the canoe on our car and drove to Lake Hiawatha. We left the bikes there and drove about 5 miles up-stream to Pamela Park. We levt the car there and canoed back down to our bicycles at Lake Hiawatha. There, we chained our canoe to a tree and rode the bikes back upstream to the car. Finally, we drove back to Lake Hiawatha, picked up the canoe, and came home. 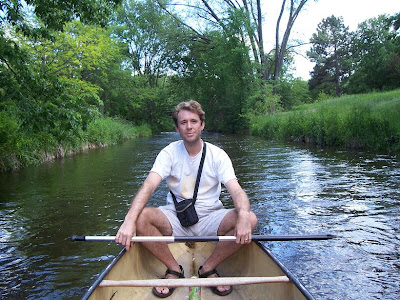 Since the creek is in the middle of a very urban area, there were a lot of bridges to go under. Some of them were extremely low. On half-a-dozen locations, there was only a foot or two of clearance space between the top of the canoe and the bottom of the bridge. We had to lean back as far as we could and lay flat against the top of the canoe to fit under the bridges. Another hazard: golfers. 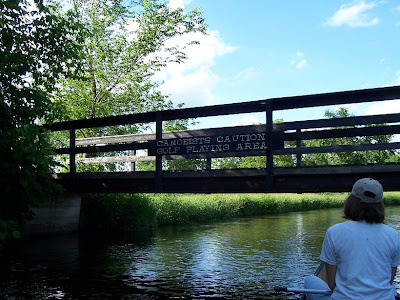 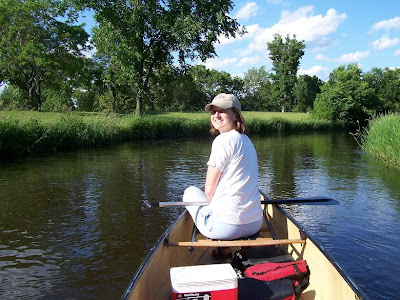 Up next week: it will be hard to have an adventure this weekend since I’ll be out camping with the 11 year-old scouts friday night (NOTE: while that may be an adventure of it’s own, since Mel isn’t there, it doesn’t count).