So the rain finally stopped early this morning, so we were able to start working around 12:00 noon and continue digging for around 5.5 more hours. Most of that time was spent trying to finish excavating the patio area. It’s so close to some really large trees, though, so digging through (and cutting through) the roots was frustrating. Here’s some pics of our progress. We think we’re about 50% through the excavation phase. Here’s me standing next to the very large pile of dirt we’re creating. We have no idea what we’re going to do with it when we’re through. I was hoping we would be able to redistribute the dirt throughout the yard… but this is way more than I was expecting, so I really don’t have a clue what we’ll do with the dirt, yet. 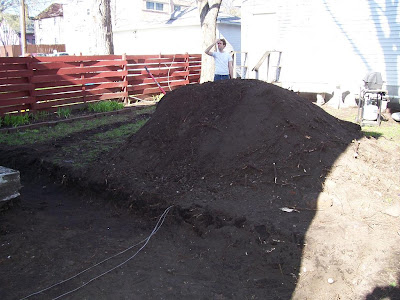 We finished excavating the patio area and part of the walkway that will wrap around to the side of the house. While we were digging out the walkway, Melanie discovered the remains of an old stone walkway about 2-3 inches below the surface, so she spent a lot of time unearthing heavy blocks of granite (i think). The old walkway was pretty cool, and we thought about trying to reuse it, but it would have been pretty hard, so now we’re trying to figure out what to do with these granite blocks. We’ve got some ideas brewing…. 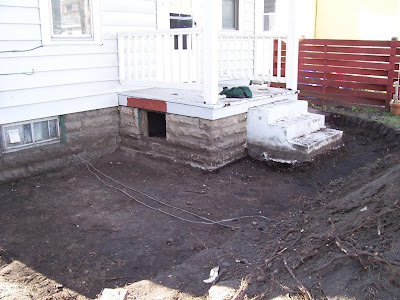 We had one casualty today, though. My shovel was unable to keep up with my advanced digging techniques. And here’s one more of me just standing around watching Mel take pictures. 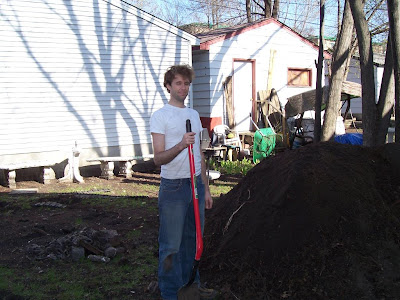